Sanctuary webinar 2: Creating spaces of safety and empowerment during the asylum process

You disliked this video. Thanks for the feedback!

Added 6 months ago by
31 Views
This international webinar on June 2, 2021 was offered as part of a 4-part series titled Sanctuary & the Global Migration Regime. The spring 2021 series was co-hosted by the Fellowship of Reconciliation, the International Sanctuary Declaration Campaign, and the Ecumenical Committee on Church Asylum (Germany).

This program, "Creating spaces of safety and empowerment during the asylum process," featuring four speakers from around the world. They were:
* Claudia Gomez is an Afro-Colombian artist, occupational therapist, refugee, and former resident of Romero House / Toronto. She is the founder of the Intercultural Collective Ethnicities in Cali-Colombia and in Toronto as well, in which she works as an activist through the arts (dance, theater, music, handcrafts), demanding human rights in Colombia in general and in the Afro-Colombian population in particular. She is part of the Truth Commission of Colombia Node Ontario which is looking for clarifying the truth about what happened and is happening in the frame of armed conflicts in Colombia (one of the largest and most cruel conflict around the world) and has been working with Colombian victims of armed conflicts for eight years.

* Marisa Limón Garza is a native fronteriza with over 18 years of experience engaging multicultural communities through the lens of advocacy, education, strategic communications, and community involvement. She currently serves as deputy director of the Hope Border Institute, a social justice nonprofit organization working in El Paso TX, Ciudad Juárez, Mexico, and Las Cruces, New Mexico. Marisa holds a master’s degree in education and bachelor’s in English and Spanish literature from the University of Notre Dame and a certificate in nonprofit management from Georgetown University.

* Elizabeth Ngari is the founder of Women in Exile, an initiative of refugee women founded in Brandenburg/Germany in 2002 by refugee women to fight for their rights. They decided to organize as a refugee women’s group because they have made the experience that refugee women are doubly discriminated against not only by racist laws and discriminatory refugee laws in general but also as women. ‘Women in Exile & Friends’ was formed in 2011 by Women in Exile & activists in solidarity without refugee background. Together we conduct the campaign titled “No Lager for Women! Abolish all Lagers!”

* Ilka Vega (moderator) is a native transfronteriza from Ciudad Juarez, Mexico, and El Paso, Texas. She holds a B.A. in business and in sustainability, culture, and social justice from Southwestern University and is currently studying a MSc. in innovation, human development, and sustainability at the University of Geneva. She has worked for over 10 years with NGOs on issues of immigration, climate action, and racial justice. From 2018 to 2020, she worked at Hope Border Institute as community engagement and administrative specialist, and has served for four years as part of the Racial Justice Charter Support Group of the United Methodist Women.
Commenting disabled.

Sanctuary webinar 2: Creating spaces of safety and empowerment during the asylum process 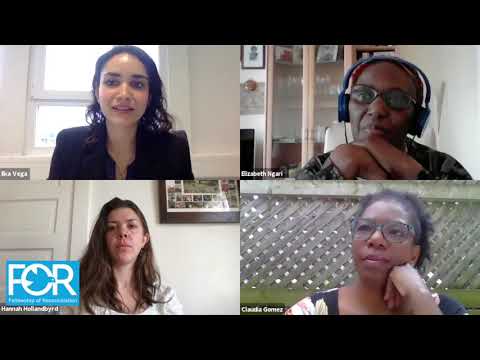 This international webinar on June 2, 2021 was offered as part of a 4-part series titled Sanctuary & the Global Migration Regime. The spring 2021 seri...